Pornchai Moontri at the Narrow Gate 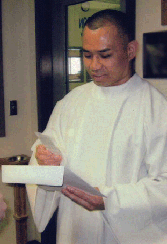 
"The best predictor of future behavior is past behavior." I was once very disappointed to hear a judge say that as he imposed sentence on a young man in his court. Imagine being known and judged for the rest of your life solely for the worst mistake you have ever made, with no hope for atonement or restoring your name.

In the 1980's and 1990's, the balance between rehabilitation and punishment shifted in American prisons and courts. Sentences grew longer - much longer - and the path out of prison became far steeper. Former U.S. Supreme Court Chief Justice Warren Burger once wrote:

"We must accept the reality that to confine offenders behind walls without trying to change them is an expensive folly with short-term benefits - winning battles while losing the war."

Justice Burger was right. The current rate of incarceration in the U.S. is almost five times the world average. But should everyone who is in prison remain in prison? Is punishment, and not redemption, all we can hope for?

Last year, the Catholic Church welcomed Pornchai Moontri into a life of faith. On September 10th, 2011 Pornchai will turn 38 years of age. Exactly half his life - 19 years - has been spent in prison. At the age of 18, Pornchai committed an act of violence that took a man's life. It was not what he set out to do. For the next thirteen years in Maine's prisons, Pornchai was locked away and labeled as beyond redemption. He responded accordingly. Pornchai was locked in a high security cell for 23 hours a day because he could not, or would not, control the rage that burned within him. After thirteen years with a dismal prison record, Pornchai was transferred to a New Hampshire prison. The story of what happened next is well told, and you should read it for yourself. It is simply amazing! (see "Pornchai's Story" under "Commentary").

Three years ago, the Catholic League for Religious and Civil Rights published "Pornchai's Story" as "The Conversion Story of 2008." It got a lot of notice. Pornchai received many comments about his journey to faith including personal letters from Cardinal Michai Kitbunchu, the Archbishop of Bangkok, and from the United States Ambassador to the Holy See as well as the late Father Richard John Neuhaus, among others. "Pornchai's Story" was reprinted in Thailand andat an online site on prayer and conversion here in the U.S. The response to his story was remarkable, as is the path that brought him to this point in his life.

When Pornchai Moontri was sentenced at age eighteen to 45 years in prison, the judge cited her belief that Pornchai had "many opportunities" in the United States to "turn his life around." Anyone who reads "Pornchai's Story" is left to wonder exactly what those opportunities were. If the judge knew the entire story of Pornchai's life up to the point at which he committed his awful crime, it is doubtful that she would have characterized his life in terms of "opportunity."

But the judge did not know the whole story, and still doesn't. Justice will one day require that Pornchai stand before a human judge again, and with an advocate who will present the entire truth. That day is, hopefully, not too far away.

In the meantime, Pornchai has stood before a far greater Judge, and the result is simply extraordinary. In the last five years, Pornchai has enrolled in and completed programs in Interpersonal Violence, Commitment to Change, Anger Management, Victim Impact, Life Skills, and others. He has been awarded certificates for over 600 hours of post-secondary education in Culinary Arts, Computer Sciences, and advanced mathematics. He has taken every course in mathematics that the prison Education Department has to offer. Pornchai is rather modest about his giftedness in math, a skill he generously uses to tutor other inmates. Math is the most common obstacle for inmates trying to obtain their G.E.D. high school equivalency diplomas.

One young inmate wrote in a letter in Pornchai's prison file:

"I had been unable to pass the G.E.D. math exams and pretests. I just could not understand the math. For almost three
months, Pornchai Moontri worked with me several hours per week. Today I received my G.E.D. grade report: I got a 500
in math and passed all the others for a total score of 2630. I never in my life believed this would be possible. I have my
G.E.D. today because of Pornchai Moontri.”

Pornchai has also been cited twice by prison officials for his volunteer work as a mentor and teacher in a prison program for young, first time offenders called Fast Track. Pornchai developed and implemented a challenging physical fitness curriculum, and personally led the inmate participants in twice per day endurance routines. These young men admired and respected Pornchai who had an enormous influence on them. When others in prison were recruiting young inmates for gangs, Pornchai was teaching them math, helping them build self-confidence, and speaking openly with them about his path to redemption. Pornchai now spends his spare time studying the Catholic faith to which he is preparing to commit himself. He completed an excellent ten-part correspondence course in Catholic studies sponsored by the Knights of Columbus, and is now enrolled in theology courses at Catholic Distance University. His grade point average for his first two university level theology courses is 98%.

I asked Pornchai Moontri if he understands the moment at which his life changed course so radically. It wasn't the company he keeps these days, or the thanks he receives for his service to others. It wasn't the letters from prominent people, or his becoming aware of his giftedness in math. It was hearing the Word of God. Specifically, it was hearing Matthew 7:13:

The Gospel that we Catholics hear Sunday after Sunday left Pornchai thunderstruck. He said he now asks himself every day and in everything he faces, "What is the Narrow Gate for me?" This Gospel passage planted a seed sown by God Himself in the depths of Pornchai's soul. No human could have accomplished within Pornchai what God has accomplished. Pornchai was called upon to change, and the change was fundamental in his very core.

We who welcome Pornchai to a life of faith also agonize with him. When his prison sentence is over, he will be punished yet again. Like all who have committed crimes on U.S. soil, he is ordered to be deported to his native Thailand from which he was taken at the age of eleven in 1985. Pornchai also spends his days studying Thai, a language he never learned to read and write and one he hasn't heard spoken for 25 years. Pornchai hopes to seek some clemency from his remaining sentence so that he may go to Thailand at an age at which he can still build a life. His atonement, he says, is to be a life of service to others. Is our country beyond mercy? No number of years or decades in prison can restore the life lost through Pornchai's crime. However, he clearly is no longer that young man driven to despair. It is time for the justice system to revisit justice.

Pornchai has chosen the name "Maximillian" as his Christian name. It is a name I have read before on These Stone Walls. It permeates the very cell where Pornchai lives, and has profoundly influenced his world. Pornchai Moontri has fallen into the hands of the Living God.
Posted by Ryan A. MacDonald (RAM) at 1:46 PM