To Azazel: Father Gordon MacRae and the Gospel of Mercy 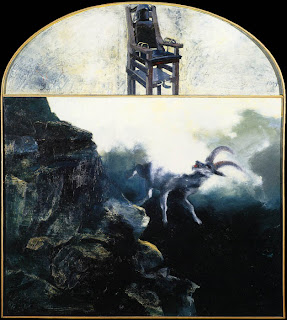 
"Aaron shall lay his hands on the head of the live goat and confess upon him all the sins of the people of Israel. The goat shall bear all their sins to a solitary place in the wilderness - to Azazel." (Leviticus 16:21-22; 28)

From his cell in the New Hampshire State Prison, Father Gordon MacRae wrote a letter awhile back to a priest of his diocese asking for help with a few questions about a parish where they once both served. The priest’s answers could have helped with a legal effort to revisit the wrongly imprisoned priest’s case. Though Father MacRae’s letter to his brother priest was courteous, it was also cautious, and for good reason.

During the nearly 17 years Father MacRae has been in prison, the Diocese of Manchester has had both public and private faces in his regard, as well as a pre-2002 disposition and a post-2002 disposition. One needs a scorecard to keep track. For years, the diocese has vaguely insisted that the imprisoned priest, through unnamed third parties, refused contact with other priests despite their efforts to be supportive. MacRae just blankly stared when asked about this. The response of the priest to whom he recently wrote, however, reflected the more private, post-2002 demeanor of MacRae's diocese. Written on church stationery, the priest's reply was chillingly brief: "I can't help you, and don't see the necessity of entertaining any further correspondence."

A few years earlier, Father MacRae wrote to another New Hampshire priest who published an op-ed article calling for a change in canon law so that accused priests can be administratively laicized by their own bishops - a sort of ecclesiastical equivalent of lethal injection. It took a degree of courage for the imprisoned and thoroughly vilified Father MacRae to write to that priest asking for an opportunity, from the point of view of the accused, to present a case for why the canonical rights of priests must be protected in these typically decades-old claims. Father MacRae's letter came back to him unopened, and placed in a larger envelope with a terse note attached: "Communications with you are neither prudent nor welcome.”

A year later, an interested writer traveled from Washington to visit Gordon MacRae in prison. When the planned visit was derailed because of an unannounced change in prison visiting rules, the writer instead attended Mass at a Catholic church near the Concord, New Hampshire prison. After Mass, the writer asked the priest if he had ever visited Father MacRae in prison. Reportedly, the priest's demeanor changed instantly. "You should stay away from MacRae," the priest said. "He can't be trusted. He abandoned his faith and has no interest in seeing the bishop or other priests." When asked if he had ever even met Father MacRae, the local priest admitted that he had not. Asked the source of his opinion, he said it is common knowledge in the diocese.

There are other examples, mostly of unresponsive silence from the priests in his diocese to whom Father MacRae has written over the years - with two brief but graceful exceptions. But even those replies seemed in no way to appreciate the reality - the utter, inexcusable scandal - that Father MacRae has been in prison for almost 17 years just 15 miles from the Chancery Office of his diocese, and yet he has never been visited by a priest of his diocese. Long time prison chaplain Russ Sweeney now retired, refuted the impression that MacRae refused visits from other priests:
"I have been told by priests that Diocesan officials claimed Father MacRae refused, through unnamed third parties, to be visited by any priest. During my ten years as [prison] chaplain, no one in the Diocese of Manchester ever asked me to arrange a visit with Father MacRae who often expressed bewilderment at the lack of contact. It remains my belief that Father MacRae is for some reason viewed differently from other priests who have been incarcerated."

Why he is viewed differently is unknown, and if Father MacRae himself knows, he isn’t saying. Those who know him say that throughout his ordeal he has declined to say or write a single word criticizing his bishop or fellow priests in public. The only apparent difference between the MacRae case and three other New Hampshire priests who have been in prison - and the fifty others who have been accused - is that Father Gordon MacRae is the only one who has maintained that the claims against him were a fraud. He is serving a sixty-seven year sentence imposed after he three times refused a "plea bargain" in which he was offered a sentence of one to three years.

It should be noted that Bishop John McCormack used to visit Father MacRae once per year, his last visit being a spontaneous 15-minute meeting after an Advent Mass at the prison four years ago. Bishop McCormack does not respond or responds "unresponsively," to most of MacRae's mail. A few years ago the imprisoned priest wrote to his bishop and to the New Hampshire Attorney General asking for information about the process by which communications he thought were privileged ended up published on-line.

The Attorney General responded with a detailed explanation. She insisted that all Diocesan files were obtained as a result of a Grand Jury subpoena, and that under state law Grand Jury files are confidential. “The Diocese had to waive confidentiality, and did waive confidentiality, for the priests’ files to be published.” Bishop McCormack did not respond at all to MacRae’s inquiry, and that seems to be the point at which all visits and communication ceased.

The previous Bishop of Manchester, the late Bishop Leo O'Neil, never even met Father MacRae during the five years that his tenure overlapped with the priest's imprisonment. Auxiliary Bishop Francis Christian has not seen or spoken with Father MacRae since before his trial seventeen years ago.

The demeanor of the two Manchester priests, who responded as they did to Father Gordon MacRae's letters, though certainly not reflective of the Gospel, might even be understandable to the more vindictive among us if MacRae’s bishop and diocese indeed believed him to be guilty. That is by no means clear, however. Documents released by the diocese and the state as a result of a 2003 agreement with the New Hampshire Attorney General - the first of its kind in the nation - reveal significant doubt, and much duplicity, about the matter of Father MacRae's actual guilt. At the time they wrote those memos, church personnel clearly did not anticipate that the memos would ever see the light of day.

In a 2001 confidential memo to Bishop McCormack, diocesan attorney Bradford E. Cook wrote: "There were certainly imperfections in the judge's handling of [MacRae's trial]." In regard to the actual claims against Father MacRae he wrote: "Whether it was all trumped up or totally manufactured is impossible to know .... That it was embellished is clear.” The diocesan attorney cited that a number of other priests where Father MacRae served were also accused - some by the same people who accused MacRae: "It is impossible to discount that one or more of them may have been involved with one or more of [MacRae's accusers]."

In another confidential 2001 memo, diocesan Chancellor Rev. Edward Arsenault noted that errors occurred in MacRae's trial, and cited the unfairness of the diocese's refusal to assist him with an appeal forcing him to rely on a public defender for his only remaining hope for justice. Arsenault recommended that the diocese deal with the matter of funding an appellate defense for MacRae by coming up with a remedy for "the lack of base remuneration" from the diocese as required by Church law. On the very verge of these Church officials finally stepping to the plate to help their priest, the 2002 national scandal implicated Bishop McCormack and cast Father Gordon MacRae back into the abyss.

Two persons, a New Hampshire attorney and a former television news producer, have attested under oath that in 2000 Bishop McCormack told them of his belief that Father MacRae is innocent of the claims for which he is in prison, then demanded secrecy, saying, "None of this can ever leave this room."

After spending ten years providing spiritual counseling to prisoner Gordon MacRae behind bars, former prison chaplain John Sweeney wrote to a Church official in 2004:
"Father MacRae has consistently put the perceived needs of the Church and priesthood above his own. I remain
concerned that Father MacRae may not have fully defended himself because he feared compromising other priests and
Church officials."

Now here we are some nine years and over two billion dollars later, and the failures of our spiritual leaders are now compounded by a failure of mercy, a failure to live courageously the mandate of the Gospel of Mercy. In a defensive missive to Rome, Bishop McCormack wrote that he and the diocese would risk public ridicule if they helped Father Gordon MacRae. So be it. If bishops and priests are so prepared to abandon their own, what hope is there in the Church for any of us?

The pretense in New Hampshire that Father Gordon MacRae is somehow the poster priest for abuse is absurd. With but a few heroic exceptions, the conduct of priests toward their accused brothers in prison - some of whom are guilty and some apparently not - has been appallingly self-serving and scandalous. Our Church deserves better stewardship of the Gospel of Mercy.

Hebrews 13:3 exhorts us to, "Remember those who are in prison as though in prison with them." The two priests who responded to their imprisoned brother’s letters by throwing them back in his face - and others who have scapegoated the accused among their brothers - need a long, reflective retreat. They have brought scandal upon the faithful.


(Ryan A. MacDonald’s commentaries on the priesthood scandal have been published in Homiletic & Pastoral Review, Catholic Exchange, Catholic Lane, These Stone Walls, and other venues.)
Posted by Ryan A. MacDonald (RAM) at 8:56 PM