At the Catholic Media Association, Bias and a Double Standard

Dietrich Bonhoeffer, Fr Walter Ciszek, Thomas More, Cardinal George Pell all inspired us from prison but the Catholic Media Association silences Fr Gordon MacRae.
By Ryan A. MacDonald - 15 November 2021
The Chicago-based Catholic Media Association (CMA) publishes in its preamble that it exists "to spread and to support the Kingdom of God" with "principles derived from the Catholic faith."  Many Catholics might be hard-pressed to comprehend how that is accomplished by the creation of a new class of lepers in the Church, Catholic priests judged guilty for being accused.
The Catholic Media Association invites those engaged in writing and publishing regarding the Catholic faith - including Catholic bloggers - to apply for membership.  In a review of Fr Gordon MacRae's blog, Beyond These Stone Walls, Catholic Culture gave its highest marks for fidelity to the faith and for fairness and content. Our Sunday Visitor cited it as its Readers' Choice for the Best of the Catholic Web.
About.com awarded it second place in its "Best Catholic Blog" category.  The National Catholic Register has cited it in various online and print articles.  Catalyst, the Journal of the Catholic League for Religious and Civil Rights, has cited it on numerous occasions and has published two centerpiece articles by Fr MacRae who is also a member of the Catholic Writers Guild. But none of this was sufficient to overcome the prison "leper" class into which Father MacRae was relegated by the Catholic Media Association with this terse dismissal from CMA Executive Director Timothy M. Walter:
"Mr. MacRae:  I appreciate your interest in the Catholic Media Association but I'm sorry to                      inform you that the Membership Committee has denied your request for membership at this                   time."
Beyond These Stone Walls, the blog of a falsely accused and unjustly imprisoned Catholic priest, is in its twelfth year of publication.  It has inspired people on six continents, and is widely considered to be one of the most visited and influential blogs by a Catholic priest.  Though he is in prison, Father MacRae remains a priest. He has not been removed from the clerical state by the Vatican because the integrity of his trial and conviction has been widely called into question.
In a series of major articles, The Wall Street Journal concluded in 2013, "Those aware of the facts of this case find it hard to believe that any court today would overlook the perversion of justice it represents."  The late Cardinal Avery Dulles urged Father MacRae to "write a new chapter in the volume of Christian literature from those wrongly in prison."  Cardinal Dulles included Father MacRae among such honored names as Dietrich Bonhoeffer, Fr Walter Ciszek, St Thomas More, and by extension, Cardinal George Pell.  Ironically, Cardinal Pell devoted several pages of his celebrated Prison Journal Volume Two to the prison writing of Fr Gordon MacRae.
There are other striking ironies in all this.  Shortly before the CMA tersely rejected a membership application from the blog of Father MacRae, the organization awarded his Bishop, Most Reverend Peter A. Libasci of the Diocese of Manchester, with a citation for "Best Column by a Bishop in a Diocesan Magazine."  It was for an essay by Bishop Libasci about his participation at a Black Lives Matter rally.
Before the award was announced, publicity ensued regarding a lawsuit filed against Bishop Libasci alleging sexual abuse of a minor while he was a priest in the Diocese of Rockville Center, New York in 1983.  It was the same year as the allegations against Father MacRae.  Though he was not a bishop at the time of the allegations, Bishop Libasci is nonetheless subjected to a different standard than the "credible" standard now applied to accused priests.  Despite the pending civil case, Bishop Libasci remains in office and in good standing.  It seems that the Catholic Media Association, like the Vatican, has a different standard when the accused priest later becomes a bishop despite the fact that Bishop Libasci was "Father" Libasci at the time of these claims.
I have studied in detail the lawsuit against Bishop Libasci and all the media accounts that have sprung from it.  I should add here that I do not believe any of the claims against him for the same reasons that I do not believe any of the claims against Father MacRae.  None of them are rationally credible, and all of them are brought for monetary gain.
But it was Father MacRae's own writing that most swayed me on this matter.  He laid out a solid defense of his bishop, and of the canonical right to a presumption of innocence, in his widely read and highly cited article, "Bishop Peter A. Libasci Was Set Up by Governor Andrew Cuomo."
The Catholic Media Association should, in fairness, rethink this.  Father MacRae is not looking for awards.  He wants only justice and consistency.  He has a right to be spared the bias and blatant double standards that have been employed here.  He has a right to his good name.
_________________________________________________________________________________
Note:  Please share this post and visit these related posts:
The Trials of Father MacRae by Dorothy Rabinowitz, The Wall Street Journal
Fr Gordon MacRae Case Facts:  The Media Report by David F. Pierre, Jr.
Travesty of Justice:  The Ordeal of Fr. MacRae - by William Donohue, Ph.D. 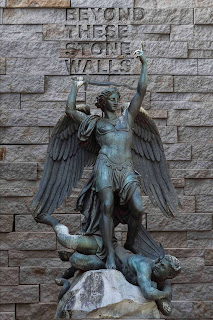